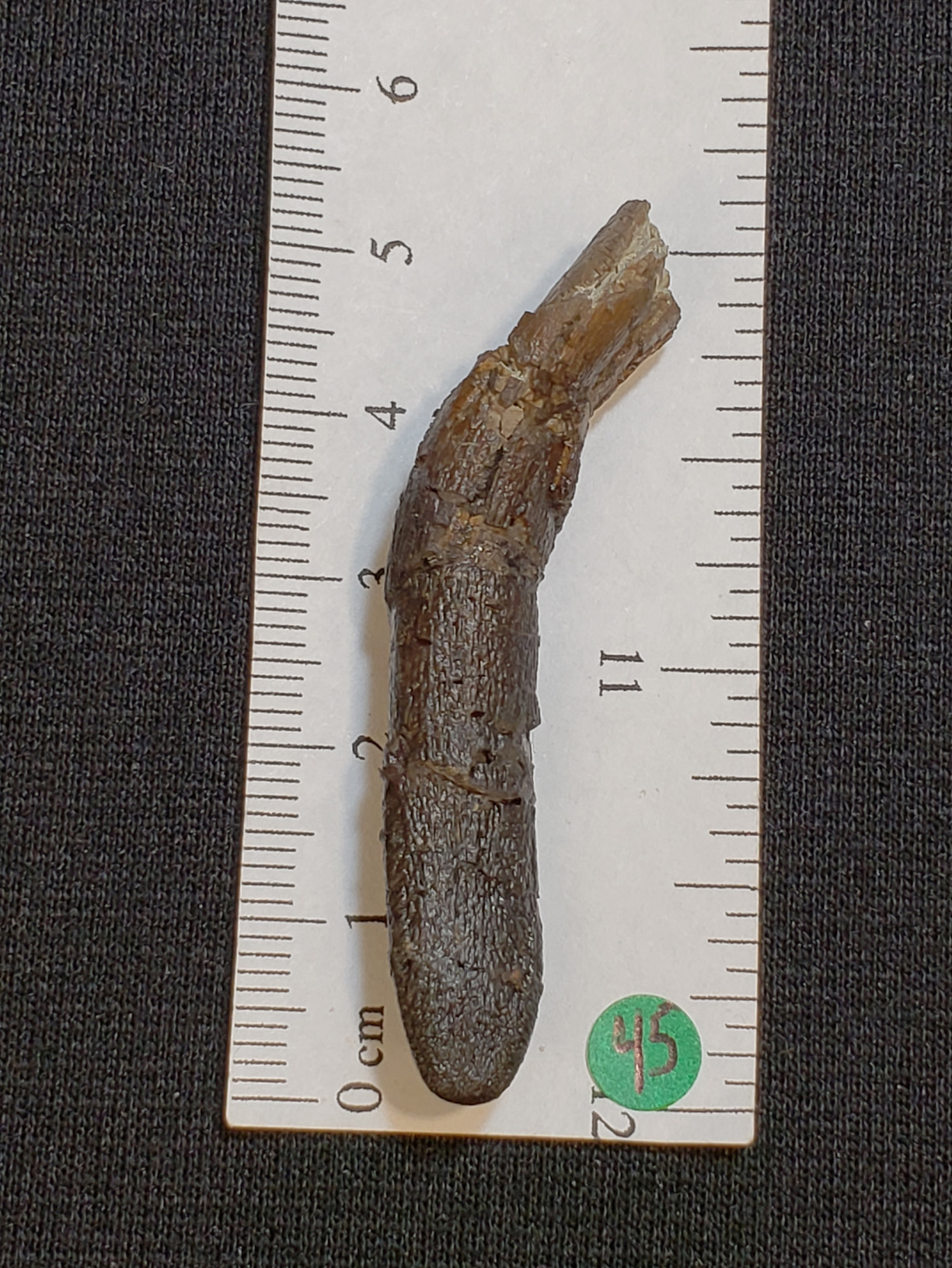 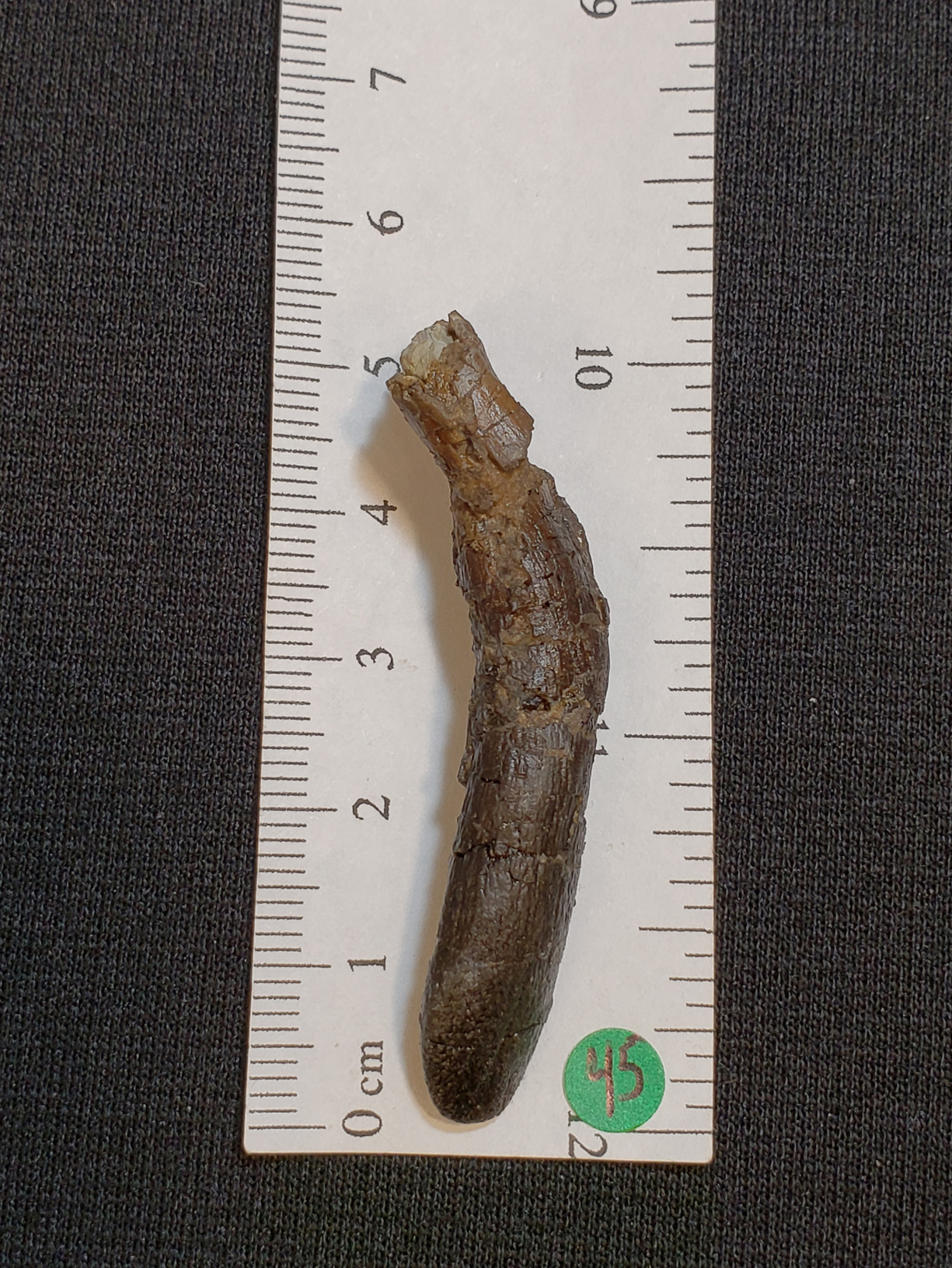 This is a premier example of the rare tooth of Apatosaurus. It is 5 cm long and is very well preserved for such a delicate relic. This specimen probably represents an un-erupted tooth as there is no visible wear at the tip. The tooth surface texture is diagnostic of the genera. This example was collected in close association with other Apatosaurus skull material. The transition from enamel to root is present in this specimen. This example has never been in pieces and was prepared in its natural aspect as found. The distortion is from soft-sediment deformation during burial and fossilization. There is very little restoration and is mainly confined to filling of natural fractures.

The cervical vertebrae of Apatosaurus are less elongated and more heavily constructed than those of Diplodocus, a diplodocid like Apatosaurus, and the bones of the leg are much stockier despite being longer, implying that Apatosaurus was a more robust animal. The tail was held above the ground during normal locomotion. Apatosaurus had a single claw on each forelimb and three on each hindlimb. The skull of Apatosaurus, long thought to be similar to Camarasaurus, is much more similar to that of Diplodocus. Apatosaurus was a generalized browser that likely held its head elevated. To lighten its vertebrae, Apatosaurus had air sacs that made the bones internally full of holes. Like that of other diplodocids, its tail may have been used as a whip to create loud noises.

The skull of Apatosaurus was confused with that of Camarasaurus and Brachiosaurus until 1909, when the holotype of A. louisae was found, and a complete skull just a few meters away from the front of the neck. Henry Fairfield Osborn disagreed with this association, and went on to mount a skeleton of Apatosaurus with a Camarasaurus skull cast. Until 1970, Apatosaurus skeletons were mounted with speculative skull casts, when McIntosh showed that more robust skulls assigned to Diplodocus were more likely from Apatosaurus.

Apatosaurus is a genus in the family Diplodocidae. It is one of the more basal genera, with only Amphicoelias, and possibly a new, unnamed genus more primitive. While the subfamily Apatosaurinae was named in 1929, the group was not used validly until an extensive 2015 study. Only Brontosaurus is also in the subfamily, with the other genera being considered as synonyms or reclassified as diplodocines. Brontosaurus has long been considered a junior synonym of Apatosaurus; its only species was reclassified as A. excelsus in 1903. However, the 2015 study concluded that Brontosaurus was a valid genus of sauropod distinct from Apatosaurus. Nevertheless, not all paleontologists agree with this division. As it existed in North America during the late Jurassic, Apatosaurus would have lived aside dinosaurs such as Allosaurus, Camarasaurus, Diplodocus, and Stegosaurus.

The skull is small in comparison with the size of the animal. The jaws are lined with spatulate (chisel-like) teeth suited to a herbivorous diet. The snout of Apatosaurus and similar diplodocoids are squared, with only Nigersaurus having a squarer skull. The braincase of Apatosaurus is well preserved in specimen BYU 17096, which also preserved much of the skeleton. A phylogenetic analysis found that the braincase had a similar morphology to those of other diplodocoids. Some skulls of Apatosaurus have been found still in articulation with their teeth. Those teeth that have the enamel surface exposed do not show any scratches on the surface; instead they display a sugary texture and little wear.

$675
Purchase
Jurassic Morrison Apatosaurus Tooth has been added to your cart.
Continue Shopping Checkout Now
© fossilAvenue.com
HOME
ABOUT US
PRODUCT CATALOG
CONTACT US